I wrote about the SS United States in a post a few months back. Today the stakes are higher than ever before. At this moment, scrappers are bidding for a chance to cut up the 1952 ocean liner. A decision may be handed down before the end of the month. 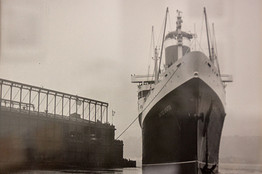 (Courtesy of Charles. B. Anderson) In 1957 the longest-serving captain, Commodore John Anderson, performed an impressive maneuver: He docked the SS United States without the aid of tugboats during a tug strike in New York City.

The SS United States Conservancy is working to make sure that doesn’t happen, and you can help. First, DONATE then TAKE ACTION by helping to spread the word to your family, friends, networks, community, and congressional representatives.

The threat of destruction now facing the SS United States—the world’s fastest ocean liner, which is currently languishing in Philadelphia—has spotlighted on a national stage the importance of maritime preservation, raising a critical question in this consumerist, throw-it-away society: What do we save and why?

As someone who has spent the past nine years helping to preserve and restore a retired 1931 New York City fireboat, I’ve often asked myself why it’s important to save old things.

Preservation is predicated on the notion that physical objects are steeped in the breathable essence of time’s passing. The physicality of spaces, buildings, vessels, and artifacts evokes a bygone age, offering a visceral sense of the past—the chance to step through yesteryear and wonder and imagine who and how we might have been had we lived then.

Without a tangible record of the past, we lose sight of our own place in time. As I step across the diamond-plate floor in the engine room of fireboat John J. Harvey, I walk the same path as the decades of engineers who came before me. I’m reminded of all the hands that have cared for this equipment, and the fine craftsmanship that went into building this vessel.

She was built to last, which is why two years after the city sold the Harvey for scrap she was able to perform, at Ground Zero in the city’s hour of greatest need, the service for which she had been built: working, with her volunteer, civilian crew, alongside the active-duty fireboats to pump Hudson River water—the only water available at the site for days following the towers’ collapse—to fight fires on land.

In MY RIVER CHRONICLES: Rediscovering America on the Hudson, I recount stories about fireboat Harvey and ponder questions of preservation, the value of craftsmanship, and what our country is losing in our shift away from making things and hands-on work. In a society that is often so quick to dispose of things, it’s crucial to raise questions about what we imbue with value and why.

My work has granted me a new perspective on the importance of saving old things. They remind us of America’s heritage as manufacturer to the world—a country of people who made things, who sweat, and toiled, and worked with their hands. This is a notion we need to get back to if we have any hope of being a self-sufficient nation.

Preserving antique vessels is a daunting challenge, but that doesn’t mean it’s not worth doing. As National Register unit coordinator of the NYS Historic Preservation Office Mark Peckham explains: “History is an inspiration for the present and for the future. We ought to retain a physical living record of how people overcame challenges, because that gives us confidence to overcome challenges in our own time. … If you take the artifacts away, the setting away, and all the places away, how can you communicate with that past?”

In My River Chronicles I recount the story of watching the 1930 tugboat K. Whittelsey, with its rare engine, get chopped up for scrap. The John Deere, outfitted with a snipping arm, gnawed away at the tug, peeling off the boat’s steel skin, the rivets popping like buttons off a shirt, the braided steel-sheathed wires splaying out like entrails. What I didn’t include in the book is that the man at the machine’s controls, Mike Giordano, told me his dream would be to have the privilege of scrapping the SS United States. “We could make it a huge media event,” he said.

Suffice it to say, I hope he doesn’t get his wish.

I recently ran into Tom Rinaldi, co-author of Hudson Valley Ruins: Forgotten Landmarks of an American Landscape. When he told me that he’s currently working on a thesis about the viability of saving the United States, I shared with him Mike’s wish, and he shook his head.

Knowing full well how difficult the road ahead will be, I wish the folks who are looking to preserve the United States the best of luck in their important work.