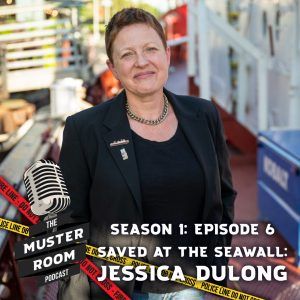 The show is a raw, hard-hitting podcast focusing on law enforcement, first responders and military aftermath of critical incidents (line of duty deaths, injuries, suicides, mass casualty incidents and other traumatizing experiences). While the topics and conversations will be serious and informative, there will be light hearted banter and comedy to allow for a relaxing environment between the hosts, guests and listeners.

Today on the Muster Room Podcast they welcome Jessica DuLong, the former chief engineer of the retired 1931 New York City fireboat, John J. Harvey. After the boat was sold into private hands in 1999 for preservation, DuLong joined the crew in February of 2001. As the events of September 11, 2001 were unfolding, the John J. Harvey was again pressed back into service to help rescue people trapped in the largest sea-born rescue in history before being called on to help fight the fires that ragged at the World Trade Center site. On September 12th DuLong arrived at the Harvey and operated the engine room and kept the historic fireboat pumping water for nearly 80 hours.

In this episode of the Muster Room, we discuss the Harvey’s role on 9/11 and how the aftermath of the tragedy impacted DuLong.

This episode is the first of a series of stories from 9/11, told by the heroes that lived them.