The news about the impact of Hurricane Irene on the Manhattan waterfront was grim so we fired up engines aboard fireboat John J. Harvey at 0500 on Saturday morning and headed upriver with a skeleton crew (Huntley Gill, Karl Schuman, John Browne, Tommy Whyte, and I), in search of a safer berth. 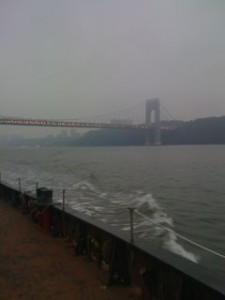 The whole river was peppered with large tug & barge units at anchor—at least one at every wide spot in the road. And we saw lots of commercial traffic northbound. Meanwhile every port was littered with what Huntley calls LSPBs (Large Shitty Plastic Boats).

We tied up in Kingston’s Rondout Creek at about midday on Saturday, which gave me time to double-up lines on Tug Gowanus Bay and complete other preparations before the storm hit on Sunday. And then all that was left to do was petition the universe for a little consideration. Our goal: Keep the boats on water, not land. 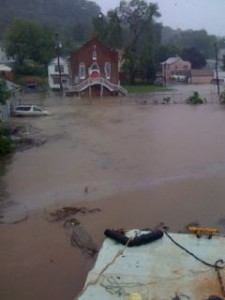 By 11 am on Sunday the creek was ripping. Water flowed over the bulkhead though high tide wasn’t until 1330. The power went out, killing the small submersible pumps that were keeping afloat the barge that the fireboat was tied up alongside. The barge, of course, started to sink. I got air up and prepped the engines for a quick fire-up if a sudden exit was necessary, and tried not to stress about the fact that it was raining in the engine room. Our poor boat has such a hard time keeping the water out on all sides. 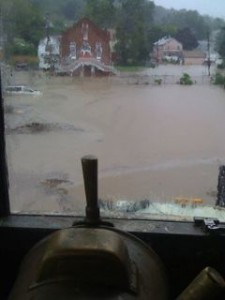 We watched a minivan begin to get swallowed up by the flood, and as the last bollard we were tied to vanished underwater, I warmed up engines, just in case. Ducks and fish swam down Strand Street, enjoying their new territory. 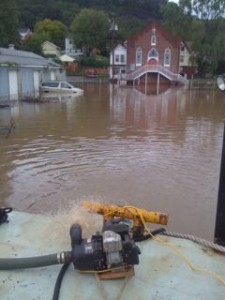 Huntley, Karl, and I set up two 3-inch trash pumps on the barge to keep it from sinking. Before long the rushing brown creek filled with rainbow swirls—evidence that some fuel tank must have let go upstream. Then more solid debris started careening by: somebody’s deck, a whole field’s worth of pumpkins, and a slew of sailboats that had been ripped off their moorings and began smashing into our bow. 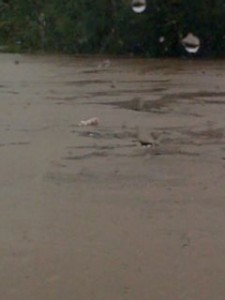 Karl was able to secure a 20-footer with a grappling hook and tie it to a port-side bitt, but before he could figure out salvage rights laws a heavy wooden dock zipped downstream, smashed into the boat, and ripped the line right off. The pair then shot toward wooden tug W.O. Decker, who was tied up several hundred yards behind us. After a clunk, they managed to fend off the attack. 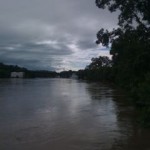 At three o’clock the sun finally broke through the clouds, but the water stayed high—way too high to get off the boat. So we scavenged around for food and counted our blessings that both boats seemed to be holding their own.

Around midnight I fired up the 2-71 again to top off the air tanks in preparation for the next high tide, due around 0200. I watched as the bollards our lines were tied to disappeared again, but the boat seemed stable. Down to the bunk for a nap.

By 0730, mud showed where there had been a good three feet of water, so at last we were able to step off the boat. But the creek was running way too fast (a good 10-12 knots, they say) for us to drop lines and make the spin to head toward the Hudson. So we’d have to ride out one more night. 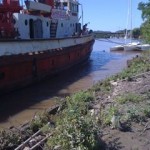 At 0730 on Tuesday morning we discovered the barge had vanished overnight. Fortunately most of our lines ran to bollards on the shore, but we worried that once the tide rose, then fell again, the fireboat might land on top of the sunken barge, causing who knows what kind of awful damage. It was time to go home. 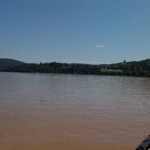 This is not the Mississippi

We made it off and down the creek unscathed, riding the runoff downriver at a speedy 11.5 knots, despite bucking tide. The river was so brown it was almost orange. Iridescent even. At around 1815 we arrived back at our berth at Pier 66, which had weathered the storm nicely, after all.
Fireboats // Tugboats