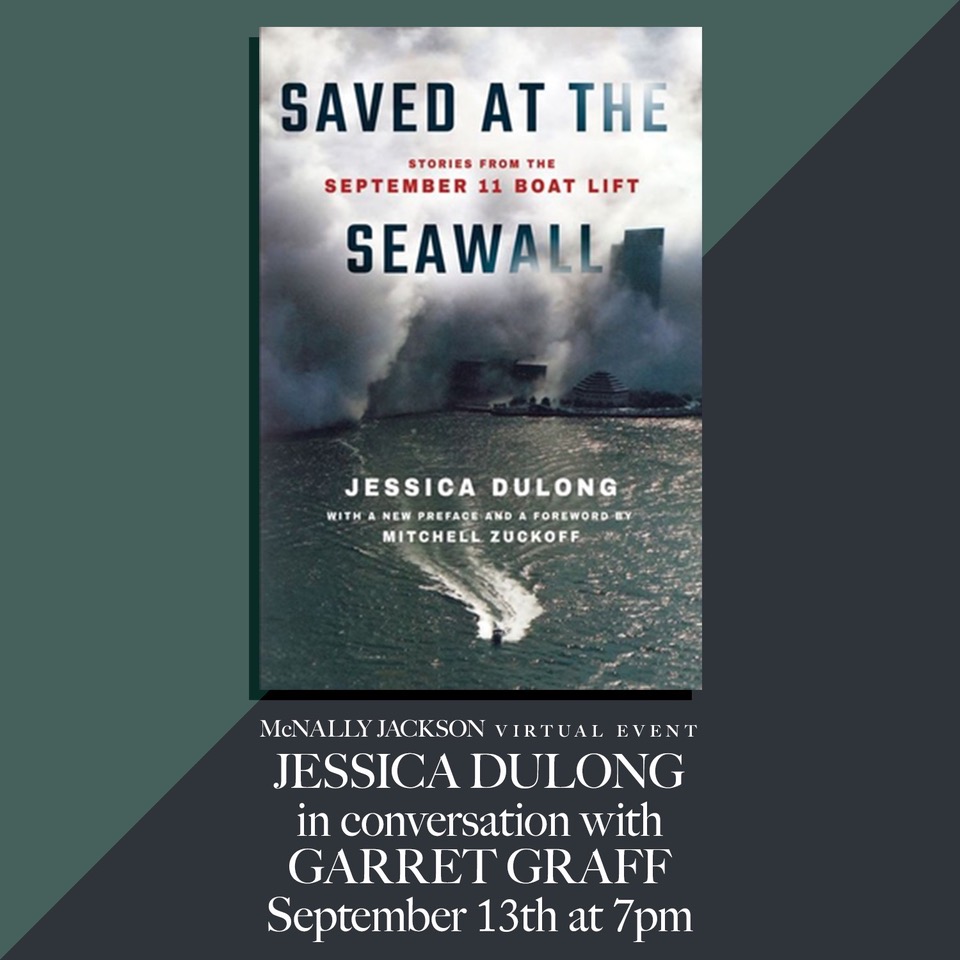 Saved at the Seawall is the definitive history of the largest ever waterborne evacuation. Jessica DuLong reveals the dramatic story of how the New York Harbor maritime community heroically delivered stranded commuters, residents, and visitors out of harm’s way. Even before the US Coast Guard called for all available boats, tugs, ferries, dinner boats, and other vessels had sped to the rescue from points all across New York Harbor. In less than nine hours, captains and crews transported nearly half a million people from Manhattan.

Anchored in eyewitness accounts and written by a mariner who served at Ground Zero, Saved at the Seawall weaves together the personal stories of people rescued that day with those of the mariners who saved them. DuLong describes the inner workings of New York Harbor and reveals the collaborative power of its close-knit community. Her chronicle of those crucial hours, when hundreds of thousands of lives were at risk, highlights how resourcefulness and basic human goodness triumphed over turmoil on one of America’s darkest days.

Initially published as Dust to Deliverance, this edition, released in time for the twentieth anniversary, contains new updates: a preface by DuLong and a foreword by Mitchell Zuckoff.

Jessica DuLong is an author, historian, editor, and book collaborator/coach, who has taught writing with Voices from War and The Sackett Street Writers Workshop. Her most recent book, Saved at the Seawall: Stories from the September 11 Boat Lift  is the definitive history of the largest-ever boat lift, which rescued nearly half a million people from Manhattan Island.

DuLong’s first book, My River Chronicles: Rediscovering the Work that Built America, was lauded in the New York Times as “very fine and gutsy” and won the 2010 American Society of Journalists and Authors Outstanding Book Award for memoir. DuLong is also a USCG-licensed marine engineer who served aboard retired 1931 NYC fireboat John J. Harvey for two decades, 11 of those years as chief.

Garrett M. Graff, a distinguished journalist and bestselling historian, has spent more than a dozen years covering politics, technology, and national security. He serves as the director of cyber initiatives for The Aspen Institute, and is a contributor to WIRED and CNN. He’s written for publications from Esquire to Rolling Stone to the New York Times, and served as editor of two of Washington’s most prestigious magazines, Washingtonian and POLITICO Magazine.

A native of Vermont, Graff is the author of multiple books, including The Threat Matrix: Inside Robert Mueller’s FBI and the national bestseller, Raven Rock, about the government’s Cold War Doomsday plans. His most recent book, an instant New York Times bestseller and #1 national bestseller, The Only Plane in the Sky: An Oral History of 9/11 was called a “a priceless civic gift” by the Wall Street Journal and was named the industry’s 2020 Audiobook of the Year.

Tags: Saved at the Seawall