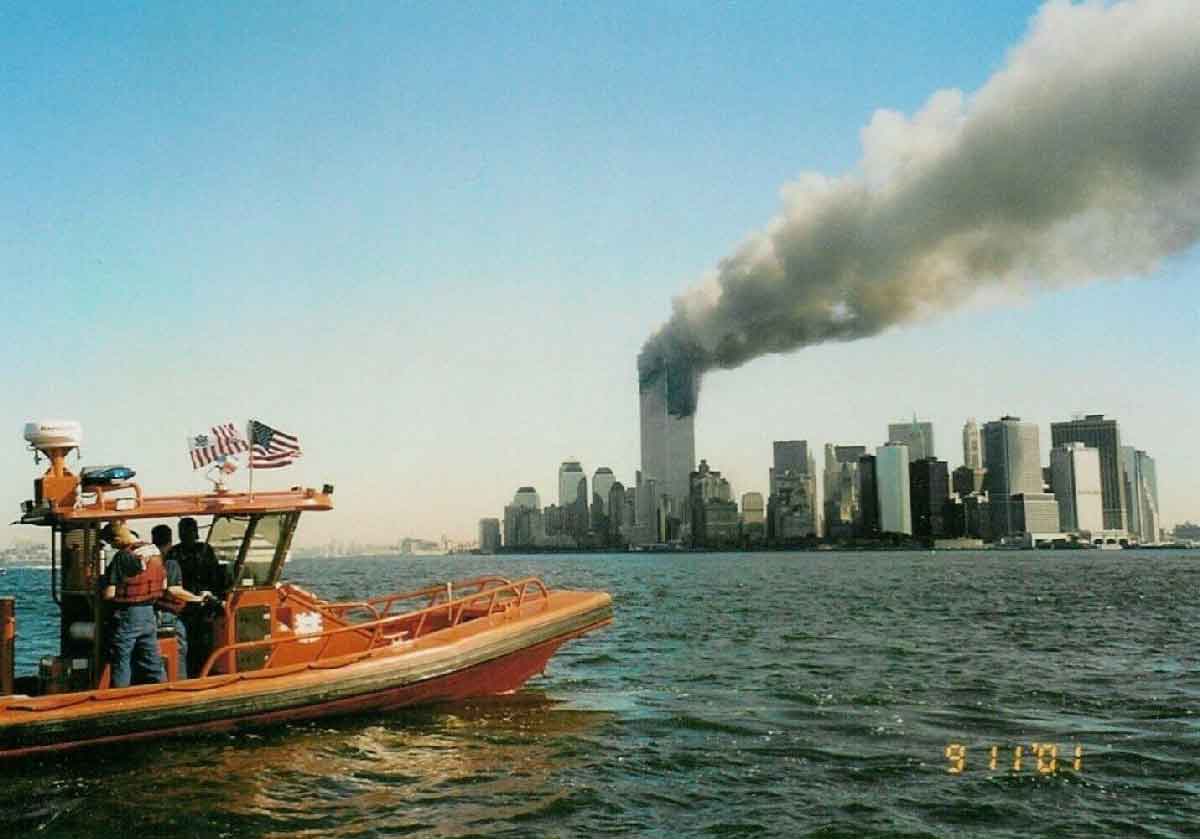 Please join us on September 11, 2021, the twenty-year anniversary of 9/11, for a tribute to the great boatlift of the day and the role our maritime heritage community played in its success. We will screen the short documentary film Boatlift: An Untold Tale of 9/11 Resilience narrated by Tom Hanks, followed by a panel discussion on the largest water evacuation in maritime history.  Joining us for the panel discussion will be NMHS trustee emeritus RADM Richard Larrabee, USCG (Ret.), USCG Safety and Security Division Chief for Sector New York John Hillin, president of the New Jersey Sandy Hook Pilots Association Capt. Andrew McGovern, founder of the fireboat John J. Harvey Huntley Gill, and USCG-licensed marine engineer and author of Saved at the Seawall: Stories from the September 11 Boat Lift Jessica DuLong.  NMHS Seminar Series Steering Committee chairman Louis Liotti will moderate.

Following the September 11 attacks in New York City, people were unable to leave Lower Manhattan due to the closure of bridges and tunnels throughout the city. Within minutes of the first plane hitting the first tower, multiple fireboats from the New York City Fire Department rushed the scene, and the US Coast Guard coordinated a convoy of hundreds of merchant ships, tugboats, ferries and other vessels to evacuate stranded and injured victims. This extraordinary rescue was memorialized in the 2011 short documentary film Boatlift documenting the mass evacuation of more than 500,000 civilians in just nine hours—the largest maritime evacuation conducted in the history of the United States, moving more people from the island than even the 1940 evacuation of Allied troops from France.

Pre-registration is required. Seminars are free to attend, although we hope you will support the Series with a suggested $10 Seminar Guest donation.

Richard M. Larrabee served as the Director of the Port Commerce Department of The Port Authority of New York and New Jersey at the time of the 9/11 attacks.  He was in his 62nd floor office when the first tower was hit and the building started to rock.  He was able to escape and made it through the dust, smoke and debris, and was part of the maritime evacuation of lower Manhattan.

John Hillin has been with the U.S Coast Guard for 33 years, currently serving as the Safety and Security Division Chief for Sector New York with regulatory oversight responsibility of foreign ships, commercial facilities, and hazardous material cargo shipments for the ports of New Jersey and New York up to and including the Port of Albany. On September 11, 2001, Mr. Hillin was serving at US Coast Guard Activities New York as a supervisory marine inspector under RADM Richard E. Bennis, the Coast Guard commander who marshaled the waterborne evacuation.

Capt. Andrew McGovern was among the hundreds of vessel operators loading and evacuating men, women and children from makeshift docks along the lower portion of Manhattan on 9/11, and has been outspoken about the heroic role of seafarers during the emergency and how important the maritime industry is to the ongoing safety, security and economic wellbeing of the nation.

Huntley Gill recalls that on 9/11, John J. Harvey was recalled to service by the Fire Department of NY and reactivated as Marine Company 2. Alongside the FDNY fireboats Fire Fighter and John D. McKean, she pumped water for 80 hours until water mains in lower Manhattan were restored to service. Harvey’s action that week was the subject of countless print and video news articles as well as a 2002 Maira Kalman book Fireboat: The Heroic Adventures of the John J. Harvey.

Jessica DuLong, a USCG-licensed marine engineer, worked aboard retired NYC fireboat John J. Harvey for 20 years, 11 of those as chief. She served aboard Harvey at Ground Zero, pumping water to land-based firefighters after the World Trade Center attacks. Her book, Saved at the Seawall: Stories from the September 11 Boat Lift, is a definitive history of the largest-ever maritime evacuation. She is also the author of My River Chronicles: Rediscovering the Work that Built America.

Louis Liotti, NMHS Seminar Series Steering Committee chairman, will moderate the panel discussion.  Lou has been a member of the U.S. Coast Guard Auxiliary for over 26 years.  On 9/11, he and other members of the Auxiliary’s Hudson River Division responded to the call from RADM Bennis.  In the following months, Mr. Liotti participated in Operation Guarding Liberty, actively patrolling in and around New York Harbor.